Global smartphone shipments grew 41 percent annually to reach a record 990 million units in 2013. Huawei, Lenovo and LG were the star performers, capturing a combined 14 percent marketshare worldwide and closing the gap on Apple.

Samsung shipped a record 319.8 million smartphones worldwide and captured 32 percent marketshare in 2013. This was the largest number of units ever shipped by a smartphone vendor in a single year. Despite tough competition from a long tail of Chinese and American brands, Samsung continued to deliver numerous hit models, such as the Galaxy S4 and Note 3.

Apple grew a sluggish 13 percent annually and shipped 153.4 million smartphones worldwide for 15 percent marketshare in 2013, dipping from the 19 percent level recorded in 2012. Apple remains strong in the high-end smartphone segment, but a lack of presence in the low-end category is costing it lost volumes in fast-growing emerging markets such as India.

Samsung and Apple together accounted for almost half of all smartphones shipped worldwide in 2013. Large marketing budgets, extensive distribution channels and attractive product portfolios have enabled Samsung and Apple to maintain their grip on the smartphone industry. However, there is clearly now more competition coming from the second-tier smartphone brands.

Huawei, LG and Lenovo each grew their smartphone shipments around two times faster than the global industry average and captured a combined 14 percent marketshare. Huawei is expanding swiftly in Europe, while LG’s Optimus range is proving popular in Latin America, and Lenovo’s Android models are selling at competitive price-points across China. Samsung and Apple will need to fight hard to hold off these and other hungry challengers during 2014. 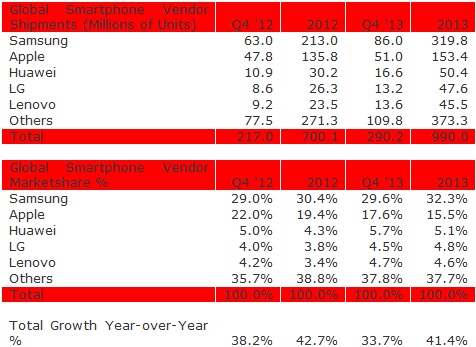