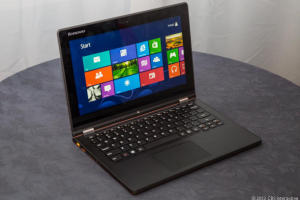 The declining trend is no surprising given that the consumer interest is moving towards more mobile devices like smartphones and tablets.

The PC market has been on the decline for the past year, but there are new hints that the situation is improving — if only slightly. Both Gartner (shown here) and IDC estimate that worldwide computer shipments dropped roughly eight percent year-over-year in the third quarter. While that’s not exactly comforting to vendors, it’s better than the double-digit losses of the past several months; the analyst groups even saw flat or positive growth in countries like Japan and the US. Any further declines in some regions may be relatively gentle, Gartner says.

As for who’s out in front?

Heavyweights like Lenovo, HP and Dell grew thanks to improving business sales and some advance shipments of Windows 8.1 PCs. Acer and ASUS, meanwhile, were dealt the worst blow as their netbook sales continued to suffer from the rise of mobile OS tablets. Neither Gartner nor IDC is predicting a turnaround for the industry, but they suggest that PC builders are finally figuring out their places in a world where mobile devices rule.

Not only PC, but MAC also

Another interesting piece of data we glean in the report is that Apple (AAPL) experienced a PC shipment decline of 11.2% in the third quarter. Perhaps, iPhone and iPad are cannibalizing MAC sales. It’s something to watch in the upcoming quarterly results. Smartphones and tablets have compressed the tech giant’s margins, falling Mac sales might further the problem; although management recent said margins will be higher thanks to iPhone 5S sales. Nobody actually wants the 5C as its price has been cut by many vendors already.

The way of the VHS

The PC is going the way of the VHS. Investors would be better served focusing on tablet leaders and suppliers. Even smartphone sales are beginning to moderate.

Despite beating Wall Street expectations in terms of shipment volumes, Apple’s share in the worldwide smartphone operating system market posted a year-over-year decline during the second quarter of 2013 (2Q13). Meanwhile, Android and Windows Phone both managed slight increases during the same period. According to the International Data Corporation (IDC) Worldwide Quarterly Mobile Phone Tracker, vendors shipped a total of 236.4 million smartphones in 2Q13, up 51.3% from the 156.2 million units shipped in 2Q12. Second quarter shipments grew 9.3% when compared to the 216.3 million units shipped in 1Q13.

Android maintained its leadership position, with strong contributions from Samsung and its Galaxy S4. Not to be overlooked were LG and Chinese vendors Huawei, Lenovo, and ZTE, which each recorded double-digit shipment volumes in the millions. Combined, these vendors accounted for 62.5% of all Android-powered smartphone shipments during the quarter. Still, the remaining vendors within the Android ecosystem should not be overlooked, as many have developed a strong local presence within key developing markets.

iOS finished the quarter as the clear number 2 operating system, showing that, even without new product launches, demand remains strong. Moreover, Apple added new mobile operators to its camp, boosting short-term volumes and cementing long-term end-user relationships. What remains to be seen is how the new iOS 7 will be received once it reaches the market later this year, as much of the look and feel of the user interface has been revamped.

Windows Phone posted the largest year-over-year increase among the top five smartphone platforms, and in the process reinforced its position as the number 3 smartphone operating system. Driving this result was Nokia, which released two new smartphones and grew its presence at multiple mobile operators. But beyond Nokia, Windows Phone remained a secondary option for other vendors, many of which have concentrated on Android. By comparison, Nokia accounted for 81.6% of all Windows Phone smartphone shipments during 2Q13.

Worldwide PC shipments totaled 76.3 million units in the first quarter of 2013 (1Q13), down -13.9% compared to the same quarter in 2012 and worse than the forecast decline of -7.7%, according to the International Data Corporation (IDC) Worldwide Quarterly PC Tracker. The extent of the year-on-year contraction marked the worst quarter since IDC began tracking the PC market quarterly in 1994. The results also marked the fourth consecutive quarter of year-on-year shipment declines.

Despite some mild improvement in the economic environment and some new PC models offering Windows 8, PC shipments were down significantly across all regions compared to a year ago. Fading Mini Notebook shipments have taken a big chunk out of the low-end market while tablets and smartphones continue to divert consumer spending. PC industry efforts to offer touch capabilities and ultraslim systems have been hampered by traditional barriers of price and component supply, as well as a weak reception for Windows 8.

“Although the reduction in shipments was not a surprise, the magnitude of the contraction is both surprising and worrisome,” said David Daoud, IDC Research Director, Personal Computing. 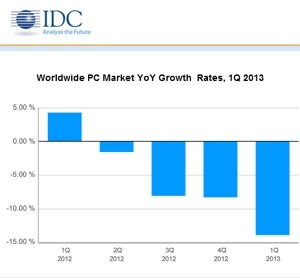 EMEA – As expected, Europe, Middle East and Africa (EMEA) remained constrained, posting a stronger double-digit decline than anticipated in the first quarter of 2013. The market response to Windows 8 and touch-enabled devices remained slow.

Japan – PC shipments were in line with expectations in the first quarter. Some economic improvement is helping to support commercial replacement demand ahead of the scheduled end of support for Windows XP next year. However, consumer shipments remained very weak.

Asia/Pacific (excluding Japan) (APeJ) – PC shipments in APeJ declined sharply, dropping a record -12.7% year on year, the first time the region has experienced a double-digit decline. Although much of the earlier Windows 7 stock had cleared, a lukewarm reception toward Windows 8 hampered new shipments.

HP remained the top vendor, but posted a substantial double-digit decline in shipments after an aggressive fourth quarter kept growth flat during the holidays. HP’s worldwide shipments fell more than -23% year on year in 1Q13.

Lenovo remained second in global shipments and nearly closed the gap with HP. Lenovo continued to outpace the market, notably expanding shipments with its attack strategy.

Dell saw shipments decline by more than -10% globally and -14% in the United States. The vendor continued to face tough competition and struggled with customer uncertainty about the direction of its restructuring.

Acer Group continued to see substantial declines in shipments across regions. As the leader in Mini Notebook shipments, the vendor has been particularly exposed to the decline in these systems. Slow consumer and SMB growth has also taken a toll.

ASUS managed some growth in the United States, but saw a substantial decline in EMEA and Asia/Pacific. The company’s substantial surge in Americas shipments in the second half of 2012 gave way to limited growth as demand weakened.

Apple fared better than the overall U.S. market, but still saw shipments decline as its own PCs also face competition from iPads.

Toshiba also saw shipments decline in the United States, but fared better than the overall market, benefitting somewhat from the restructuring of market leaders HP and Dell.

The main question is: why are we in such situation? Since beginning of 2012, we are now in a transition. People wants mobility. They buy tablets in order to have this usage. Until now, PC even laptops are too big, not adapted to mobility, not sufficiently autonomous and with a Windows in transition. These Laptops PC couldn’t be transformed in tablets, or with difficulties. Technologies were not there.

But in parallel, customers that bought tablets are viewing their current limits: easy to consume data and Apps, difficult to create documents or programs; in any case, less performing than PC.

In 2Q13, new tablets PC will be launched by several constructors. Very similar to tablets, and very similar to PC. But these Tablets PC will have too main difficulties: first is the price around 1500 euros for good touch tablet and for good PC with hard disk and minimum of 8 hours of usage and second is Windows 8, which remains in transition.

Prediction is that in 2016, only 10% of PC sold will be Desktop and 90% will be Tablet PC. Starting half of 2014, the market of tablets “alone” (as current iPAD or Galaxy Tab) will decrease.