Solar Impulse 2: On the way round the world 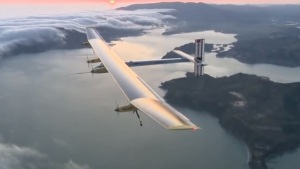 Solar Impulse is the only airplane of perpetual endurance, able to fly day and night on solar power, without a drop of fuel.

The chances of succeeding at the first attempt to build a solar airplane capable of flying around the world were judged to be slim, so a more rudimentary prototype, HB-SIA (Solar Impulse 1), was first constructed. Lessons learned from this prototype are incorporated in Solar Impulse 2, the Round-The-World Solar Airplane.

Whereas the prototype uses existing technologies, Solar Impulse HB-SIB (Solar Impulse 2) requires the development of new materials and new construction methods. Solvay has invented electrolytes that allow the energy density of the batteries to be increased; Bayer MaterialScience is allowing the project to make use of its nanotechnologies; and Décision is using carbon fibers that are lighter in weight than any previously seen.

The first wing spar section was delivered to Dübendorf in March 2012. However, during the final test of this central part, the structure of the wing spar succumbed to the load and broke. The initial shock soon turned out to be an opportunity: the flight around the world had to be postponed which opened the door for going to the United States and completing the epic journey across America.

After the official presentation of Solar Impulse 2 to the public on April 9th, the airplane will be rigorously tested during 2014, and the Round-The-World flight will be attempted between March and July 2015.

Below, the first flight of Solar Impulse 2.